The Origin and Development of the Mahjong Tile Set. Part 1. 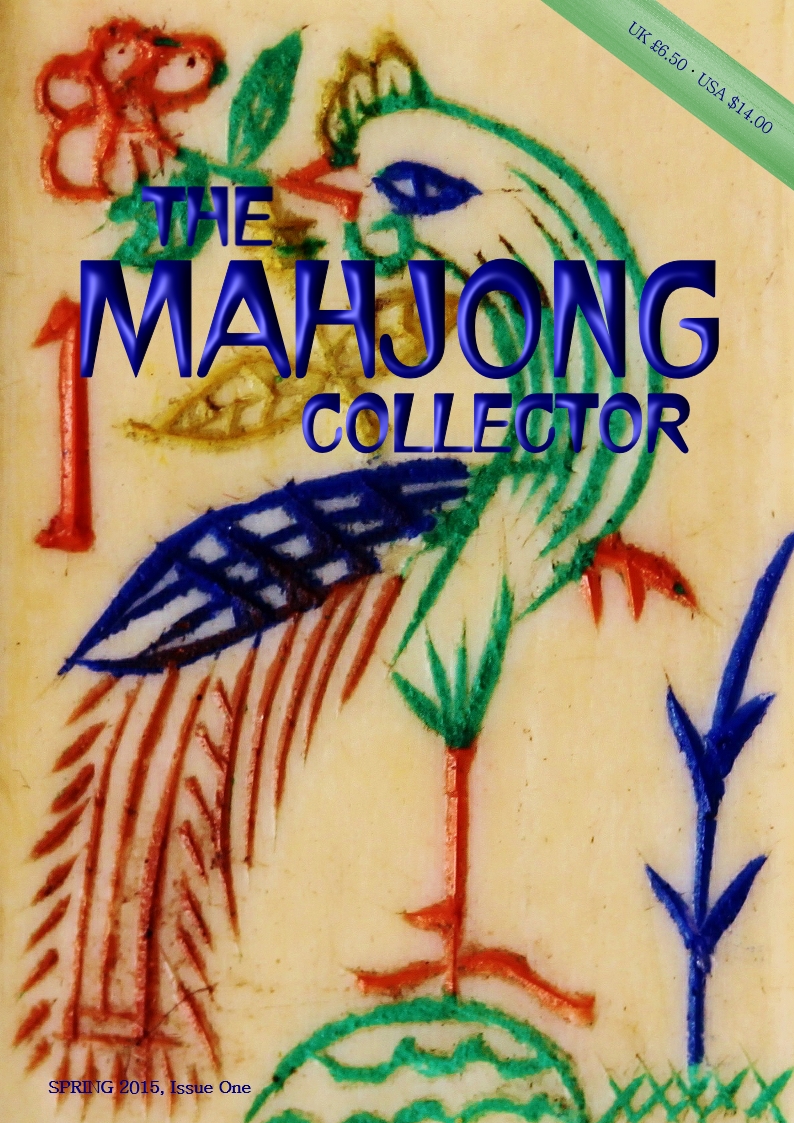 Known minor inaccuracies in the published articles have been corrected here.

To chart this development we start by recognizing that what the Chinese call 麻雀牌 maque pai “Sparrow Tiles” (now also popularly known as 麻将牌 majiang pai (probably reflecting the pronunciation of mo ziang in the Shanghai and Ningbo dialect) and “Mahjong” in the West) has a basic makeup consisting of four major groups; three suits; Directions or Winds; ‘Dragons’ and finally Flowers.

Research using archival literature, such as academic papers, Chinese novels and newspaper records, as well as the earliest tile sets collected by Western Sinologists and Anthropologists, now held in Western Museums, has produced an explanation about the development of these component groups of the maque pai (the early Sparrow/Mahjong tile set). Looking further back in time beyond the early literature and tile sets yields no mention of maque pai.

However, early sinologists and anthropologists who collected these early sets did comment and discuss its attributes relative to those of pasteboard playing card decks. Importantly one of them, a German sinologist, also discussed how one of the four tile groups was remarkably similar to what was found in a type of contemporary Chinese pasteboard playing card deck that belonged to a particular playing card family. He inferred that the Mahjong tile set, the maque tile set, belonged to that type of playing card family that used that particular type of deck.

The earliest references to a version of this type of deck are from games manual of the Late Ming Dynasty (1368 – 1644), written by scholar-merchants who had an intimate knowledge of Chinese pastimes and cultural pursuits, including card games.

We will therefore start this series examining the reasons for why the tile set was considered to belong to this particular family of Chinese pasteboard playing cards. This will entail a brief discussion of the observations that the German Sinologist Karl Himly made of his tile set and of a particular type of Chinese pasteboard playing card deck and, in turn, that will lead us to an examination of the origins of this type of playing card game from the late Ming (1368 – 1644), and its relationship to the currency of that time – particularly denominations of money and the symbols or pictographs used on Ming paper currency.

By examining the Late Ming literature on games to see how a type of pictograph and denomination was used on pasteboard playing cards. This will allow us to understand the developments that occurred that gave rise to the raw materials for the birth of the mahjong tile set and game.

From that point, we will then go forward in time, charting the tile set’s subsequent development beyond these pasteboard card games, by examining the game’s spread and eventually its gain in popularity as an integral part of Chinese leisure and gambling pastimes, the latter centred, in part, in the brothel life of the cities.

From evidence found in Chinese newspaper records and from scenes of gaming activities described in Chinese novels, we will see that these uses of the maque tile set continued into the very late 19thcentury, with the game known by different names in different locales as its popularity exploded into a widespread social pastime.

Finally, by the early 20thcentury we will see that the tile set probably began to take different forms, one of which was exported in vast quantities to the West.

1.0 From Tiles Back to Pasteboard Playing Cards

The earliest, documented tile sets that we know of, were collected by two Westerners living in China. One was collected by a German sinologist and interpreter called Karl Himly and two were collected by an American Chinese Maritime Customs official called George Bunker Glover. Coincidentally, they were in China at nearly the same time – the late 1860’s to the mid 1870’s. Himly was in the area of Shanghai and Ningbo and Glover in the area of Fuzhou. (See Figure 1.) However it was Karl Himly, stationed in Shanghai between 1868 and 1876, who has left us a thorough account of his Chinese playing card games. He was fluent in Chinese and so in his published papers he was able to describe and discuss the names of the three suits in his set. He knew the Chinese characters for the suits because they were on three special tiles that acted as 化 hua, substitution tiles or Jokers, one for each suit. Thus;

He also pointed out that two of those suit names – 索 suo “Strings (of Cash)” and 万 wan “Myriads (of Strings of Cash)” – were identical to those used for two of the suits in a class of pasteboard playing cards from the same period his set was collected. He reasoned that since those two suit names were identical then the third suit name, 同 tong “Copper (Cash)”, must also correspond to the third name of the third playing card suit, that is, 鉼 bing, (often abbreviated to 并) meaning “metal cake” as in “silver cake” or “silver coin” that was cast into the shape of a flat round cake.

His examination of the meaning of these two terms illustrated that all three names in both tile set and card deck were based on denominations of money. He also noted that the three suits in both tile set and card deck were quadruplicated – thus 36 tiles and cards in each suit. It is highly likely that the similarity in suit names, the number of suits plus the quadruplication of each piece led him to infer that his tile set was in fact a playing card game played with thick cards/tiles which belonged to a certain class of card game that also used a card deck with suits having the same characteristics as his maqiao tile set.

This class of game is called ‘Draw and Discard’ (drawing a card and discarding one), and is played with a card deck containing three suits using a money-suit system and with each card quadruplicated.

As we have seen, the Chinese names for the three suits in his tile set are;

And the Chinese names for the three suits from a three suited deck in his playing card collection are;

An example of two of these suit names, 鉼 bing and 万 wan can be see on each card in each of the two respective suits in Figure 2. Note that a simplified form of bing 并 on the Cash suit cards (bottom row) and that a different sinogram, 条 tiao string, is used instead of 索 suo, string of Cash (middle row). Unfortunately, Himly’s early maque (Mahjong) set is now lost. But he left us a very detailed description of what it looked like, right down to the colours on the bamboo tiles. From his description it was possible to reconstruct what his set looked like and this is shown in Figure 3. The number 1 Cash and the style of the circles were not described in detail, so these have been extrapolated from two almost identical sets collected by George Glover in Fuzhou, most likely between 1872 and 1873. You can see the 同 tong, 索 suo and 万 wan “substitution” or Joker tiles, for each of the three suits as the first three tiles in the seventh column from the left.

Since the tile set was a form of playing card “deck” it is therefore reasonable to examine contemporary or earlier literature describing playing card decks of the type this set belonged, to see if there is an indication as to where these suit terms came from.

As a result of an examination of early playing card manuals we find that playing cards that use the money suit system can be traced back to at least the Ming Dynasty (1368 – 1644), and in particular to a deck of cards used at the time for a very popular playing card game called 馬吊 madiao. Descriptions of this deck suggest that the portrayal of denominations of money on the cards was based, in part, on bank notes used at the time, see Figure 4. An example shown here (Figure 4.) is the famous “Da ming tongxing baochao”– (Great Ming General Circulation Treasury Note) from the era of Hongwu 1367 – 1398. On the note at the top off the central box you can see a pictograph of ten ‘strings’, each of 100 copper cash coins (10 索 suo, suo being a string of 100 coins). Thus, the denomination is 1000 copper cash = 1 guan. It is this type of pictograph and denomination that is the point at which we can begin to examine the relationship of certain currency denominations with pasteboard playing cards.

In the next installment, we shall begin with an examination of the Late Ming literature on games that described this type of pictograph and denomination on pasteboard playing cards of that time. We will also see how the subsequent changes to these cards and their suits allows us to understand the developments that occurred that most likely gave rise to the raw materials for the birth of the maque pai (Sparrow tiles/mahjong tile set) and game.