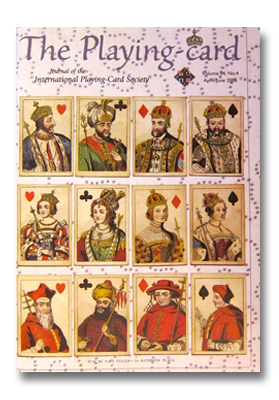 In Mah Jong(g) before Mah Jong(g) Part I, Section 3.2, (Stanwick, 2004), I briefly described a bamboo precursor tile set collected by the Sinologist Carl Himly, sometime during his stay in Shanghai as an interpreter in the German Consular Service, between 1868 and 1876. This precursor tile set was described by him in a very long article published in 1889 and in another shorter article in 1901. According to Himly (1889) the “Ningpoer Bambuskarten” (Bamboo Cards of Ningpo), in Chinese 寧波竹牌 Ningbo Zhu Pai 1, were part of his own collection of Chinese playing-card packs. In this article I have produced his original 1901 descriptions2 of the Ningbo Zhu Pai and used them for a reconstruction of the tile set.

In the Conclusion of Part 2 of “Mahjong(g) Before Mahjong(g)” (Stanwick 2004), I suggested that the Ningbo 1889 Wilkinson Pattern had survived until 1901 without modification, as exemplified by the Shanghai Laufer Pattern. In this rather detailed article, I introduce two new tile sets and propose they represent this Pattern. Based on these, I further propose that this Pattern – in Shanghai at least – may have continued to exist, with certain modifications, from 1901 to at least 1923.

Following a discussion of some of his money-suited card packs, Himly notes that although his discussion was about ‘paper cards’, that is paper 牌 pai, the Chinese word pai may refer to any “piece”, such as bamboo domino pieces. Further, because the Bamboo Cards of Ningbo also have the ‘so’ (suo, strings) and ‘wan’ of the ‘shi hu pai’ (i.e. money-suited cards), they should therefore not be removed from the general category of “cards”.

“On the 索化 ‘so hua’ (suo hua) [Strings Flower] the two engraved characters are green, on the 同化 ‘thung hua’ (tong hua)[Cash Flower] they are blue, on the 万化 ‘wan hua’ [Myriads of Cash Flower] ‘wan is red and ‘hua’ is blue. Similarly on the 万 ‘wan,’ [Myraids of Cash] from 1 to 9 the ‘wan’ [character] is red while the figure symbols are blue. In the 索 ‘so’ (suo) [Strings] [series] the colour green dominates: the 2, 3, 4, 6 and 8 are fully green, on the 5 the two strings on each side are green while the middle one is red, on the 7’s there are three green strings between two red ones, on the 9’s the three middle strings are red, the three on each side are green. In the 同 ‘thung’ (tong) [Cash suit] the colour blue is highlighted in each piece, 4 and 8 are full blue, 5 has only a red dot in the middle circle which represents the familiar holed coin [“cash or sapeck”], 1 is blue and red, 2 displays two coins, one green, one blue with a border and a red dot instead of the hole, 3 [shows] three somewhat smaller coins, one green, one red, one blue, 6 [has] four red circles and two blue, separated, as if it was a domino piece, on which also a 4 is red; it is the same on the 7’s, where also the 4 is red and the 3’s, [which] are arranged along an oblique line, are blue. The 9’s show three green, three red and three blue circles.”

Where the description is vague or ambiguous I used the AMNH Glover set as a reference, since both the Himly set and the Glover set are contemporaries and contain very similar tile groups. Thus, since Himly did not describe the form of the ‘strings’ in the ‘String of Cash’ suit, I decided to make each of the the ‘strings’ identical to the corresponding ‘strings’ in the Glover set. I also had trouble understanding Himly’s description for the # 2 and # 3 of ‘Cash’, and so their depictions are my best interpretation. Apart from the # 5 of ‘Cash’, a ‘hole’ is also mentioned in the description of the # 2 ‘Cash’ coins. However, when depicting the rest of the ‘Cash’ coins – even though Himly does not mention a ‘hole’ – the ‘hole’ was taken for granted and represented in a similar fashion to the AMNH Glover set – as largish dots the same colour as their respective coins – unless Himly stated otherwise.

In footnote # 648, Himly describes the colours of the non-suit groups: In Figure 1, the colours of the frames have been lightened, relative to the rest of the colours, so as to make them distinguishable. The discrepancies with the AMNH and BMA Glover sets are (1) the tiles are made of bamboo rather than a combination of bamboo and bone (2) the presence of the three 化 ‘hua’ tiles, the presence of a 摠王 ‘zong wang’ tile and the absence of four 中 ‘zhong’ tiles. Further, (3) there are colour differences on the # 6 and # 7 of ‘Cash’ and more conspicuously on the # 6 and # 7 of ‘Strings of Cash’. 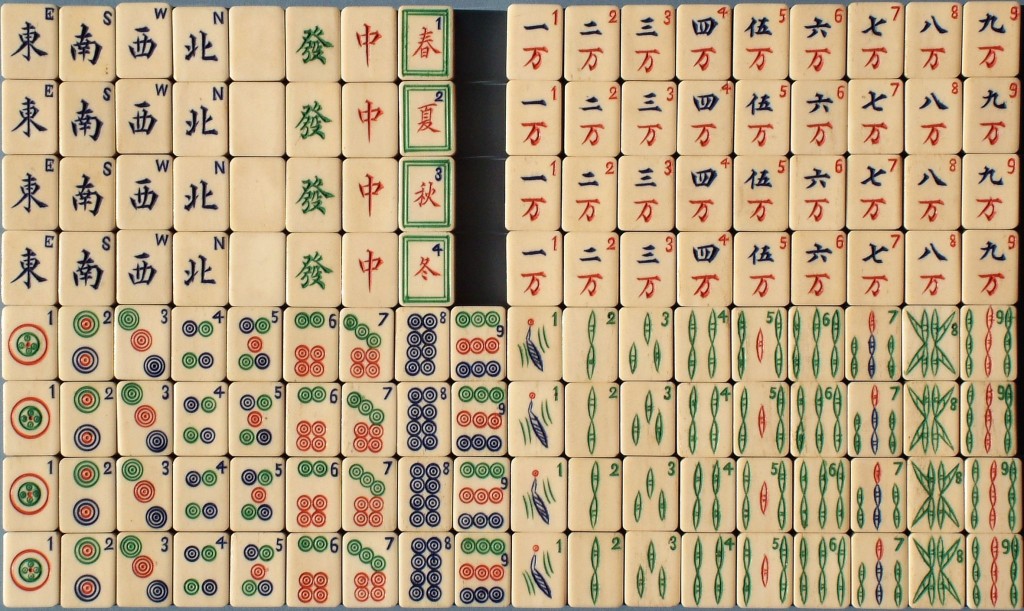 Recently, a 麻雀 ma que4 tile set (Figure 2) was acquired by the author from the United States, bearing the necessary/sufficient condition above, and having other tile group patterns5 very similar to those in the precursor Wilkinson/Laufer tile set Pattern (see Stanwick 2004, Part 2). No location of manufacture is known although the focal point for Mahjong set manufacture and export was Shanghai (The Chinese Economic Monthly, 1924). The tile set consists of 144 pieces. Each piece is composed of bone joined with a transverse dovetail joint to a bamboo base. Their dimensions are: Length 27mm. Width 20mm. Height 8mm. The set is housed, with accessories, in its original two-drawer wooden box. As well as the five drawer variety, this type was also used for Mahjong(g) sets exported from China to the West after 1920.

The similarities between the Figure 2 Pattern and the Wilkinson/Laufer Pattern are: (1) the identical representation of the 1 of ‘Cash’ as well as (2) the 1 of ‘Strings of Cash’ and the rest of the pointed ‘Strings of Cash’6 – the necessary/sufficient condition criteria (as mentioned above); (3) The presence of a ‘simple’ form for the 万 wàn ten thousand (myriad) character in the ‘Myriads of Cash’ suit (this is also a feature of both circa 1875 Glover sets and the Himly set; (4) The presence of the ‘Four Directions’ group as well as the three so-called (in the West) ‘Dragons’.

The differences between the Figure 2 Pattern and the Wilkinson/Laufer Pattern are: (1) The presence of Arabic numerals (1, 2, 3, etc) and English letters. (2) Within the character 發 fā, the central right sub-character is 殳 shū meaning ‘spear’, rather than – as in the character fā of the Wilkinson, Laufer and Culin sets – the sub-character 失 shĭ meaning ‘arrow’ 7. (3) Four double framed ‘Seasons’ tiles bearing the large red Chinese characters 春 chūn, Spring, 夏 xià, Summer, 秋 qiū, Autumn, 冬 dōng, Winter8. (5) Each of the coins on the 2 to 9 of ‘Cash’ tiles are represented by multiple circles – that is, one inside another. The number of circles used for each coin on each tile is in the distribution [23c, 33c, 42c – 92c]9. But the Wilkinson/Laufer Pattern distribution is [22c, 32c, 41c – 91c]10. It should also be noted that the use of the colours blue, green and red in the ‘Cash’ suit, and in certain instances in the ‘String of Cash’ suit, did vary over time. However, by 1920 this practice had all but finished and where these two suits were concerned the use of these colours appears to have become conventionalized11.

The Arabic numerals and English letters may have been put on at a date later than the origin of the tiles (an intermittent practice according to Foster (1924)), or the numbers and letters were present on tiles much earlier than July 1919 – the date Babcock claimed to have put them on the pieces (Foster 1924)12. However, when taken with tile size, defined by length and width13, and the nature of the box, it is the author’s view that a post-1920 date is suggested for the Figure 2 set14, although it seems that the representations for the # 1 ‘Cash’ and # 1 ‘String of Cash’ of the Wilkinson/Laufer Pattern were not to become part of the dominant pattern form after 192015, when the game exploded onto the Western market. 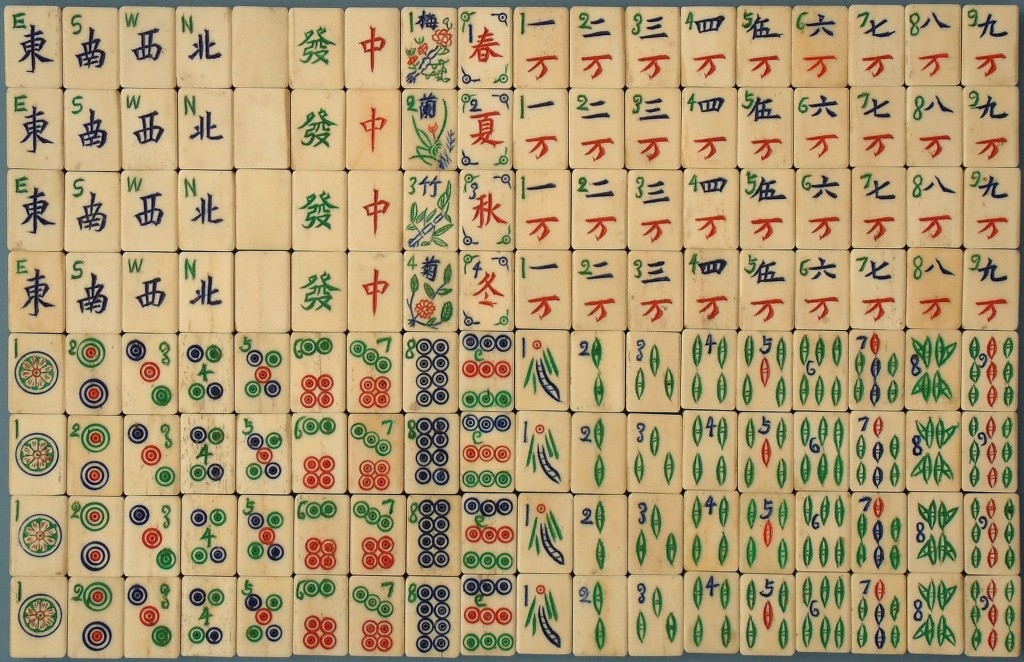 The Figure 3 tile set consists of 148 tiles. Each tile, composed of bone joined with a transverse dovetail joint to a bamboo base, has the dimensions: Length 33mm. Width 21mm. Height 7mm. All are housed in the original wooden box with five trays and a sliding front cover. This set was imported into the United States by the Mah Jongg Sales Company of America sometime after 192316.

The pattern in this set has the necessary/sufficient condition that allows it to be recognized as belonging to the Wilkinson/Laufer species.

Further, the style of engraving of the ‘South’, ‘West’ and ‘North’ characters is very similar to the style found in the Laufer tile set but, as in Figure 2, the character 發 fā now contains the later sub-character 殳 shū, rather than the earlier sub-character 失 shĭ 17.

Of special significance are the four ‘Season’ tiles, each depicted by a large red Chinese character bordered by a partial frame comprising four small circles. These provide a link with Figure 2118.

Based on these observations, and the further observation that Figures 2 and 3 belong to the species of tile set that embodies the Wilkinson/Laufer Pattern (based on the necessary/sufficient condition criteria), and assuming the sets presented here are a representative sample19 of this species, it is tentatively proposed20; (1) Between circa 1889 and 1901, the number of circles for depicting each coin on each of the ‘Cash’ suit tiles, plus the form of the wan character and the form of the pointed ‘Strings of Cash’, became standardised within Jiangsu Province at least, in the East Section of Central China. (2) Between 1920 and 1923 the basic Wilkinson/Laufer Pattern may have continued as a relict21, after undergoing modification of; (a) the fā character22; (b) the colours used in the 4 and 5 of ‘Cash’23; (c) the number of circles used for the ‘Cash’ suit coins – from the 1889/1901 distribution [22c, 32c, 41c – 91c] to the post-1920 distribution of [23c, 32c, 42c – 92c] and [23c, 33c, 42c – 92c]24; (d) the modification of the # 1 ‘Cash’. (3) Between 1901 and circa 1923 an atavistic form for the ‘Season’s’ group was included25 and (4) the wan character and the pointed ‘Strings of Cash’ remained unchanged.

It appears the basic precursor Wilkinson/Laufer Pattern survived as a relict to at least 1923, with modification of the ‘Cash’ suit colours and symbols, with modification of the fā character, and with the addition of four ‘Season’ tiles depicted in their atavistic form. As well as the aforementioned, there was the addition of extra tiles, some of which resemble groups from the earliest precursor sets. Various features of this basic Pattern were used in other tile set patterns to form hybrid Patterns – as in the 1909 Nagawa tile set for example. It also survived alongside the 1909 Culin Pattern that was set to become the dominant form after 1920. But the Culin Pattern appears to represent another pattern tradition that also underwent modification prior to 1920, as I hope to illustrate in Part 2.

Special thanks to Thierry Depaulis for his help procuring and translating the Himly texts and to Tom Sloper and Michael Hutchinson for their help creating the Himly graphic. Thanks to Troy Ozama for his Japanese translations.

‘The Rise of Mahjongg’. In: The Chinese Economic Monthly. Compiled and Published by the Chinese Government Bureau of Economic Information. No. 4, January, 1924. pp. 1 – 10.

Glittering History and Culture of Mahjong. A Guide to Mahjong Museum. Edited by the Mah-Jongg Museum (no author name). Publisher: Takeshobo, 2002. (In Japanese).

“Mah-Jongg, The Game of a Thousand Wonders,” Mah-Jongg Sales Company of America. San Francisco. 1922. (In Japanese and English).