Flowers and Kings: An Hypothesis of their Function in Early Ma Que 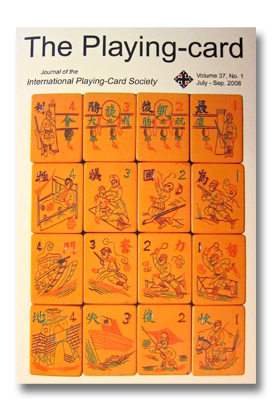 The term ‘Mahjong(g)’ denotes a Western variant (introduced to the West circa 1920, (see Stanwick 2004a)) of the Chinese game known by the double sinogram 麻雀 ma que, in modern pinyin1, literally ‘hemp bird’, but in the bonded form meaning ‘sparrow’. Further, the Chinese make no distinction between the thicknesses of their cards – cards of all thicknesses are called pai – and since ma que is first and foremost a card game played, more commonly, with very thick cards (that is, tiles), it is also denoted by the term 麻雀牌 ma que pai 2. Since this article will be referencing descriptions of this Chinese game – specifically, of the tile set and, in part, the game-play – both terms are used in this article.

1. The Tile Sets of Himly, Glover, Sheng and Nakamura

From the documentary evidence it appears the three suits of the Himly, Glover and Nakamura sets represent denominations of money4; ‘Cash’ 同 [tong]5, ‘Strings’ (of Cash) 索 [suo] and ‘Myriads’ (of Cash) 万 [wan]. The Sheng Xuanhuai set also sported the first two suits, but had a ‘Ranks’ 品 [pin] suit6 instead of the ‘myriads’ [wan] suit (Stanwick, 2006a). Aside from the three suits, these sets also consist of extra groups of tiles.

The first of these extra groups – the group known either as the four ‘Directions’ or four ‘Winds’, with the four tiles quadrupled and bearing the symbols for East 東 [dong], South 南 [nan], West 西 [xi] and North 北 [bei] – is found in the Himly, Glover and Nakamura7 sets and is also found in most known ma que pai sets after the 1870’s. However, there are exceptions. In the Sheng Xuanhuai set for example, the sixteen-tile group remains but the sinograms for ‘Four Directions’ are replaced by the alternative symbols for Benevolence 仁 [ren], Righteousness 义 [yi], Knowledge 道 [dao] and Virtuousness or Propriety 德 [de]8.

But our particular interest lies in the remaining extra groups and relates either to the meaning and function of each of the tiles in each group or, where appropriate, to the group as a whole. It is to these extra groups we now turn.

The Glover sets have a group of four ‘Center’ 中 [zhong] tiles. On the other hand, both the Himly and Nakamura sets have a group of four tiles of which the first three are a ‘Flower’ 化 [hua] tile9 of each respective suit – thus, from top to bottom, Myriads’ Flower 万化 [wan hua], Cash Flower 同化 [tong hua] and Strings’ Flower 索化 [suo hua]. The fourth tile in this group, as noted by Himly (1889), is a “King of All” (or ‘General King’) 摠王 [zong wang]. Other names for ‘zong wang’ can be ‘Almighty King’ and ‘Chief King’.

A similar group of tiles is found in the description of the Sheng Xuanhuai set. However, in place of the 化 ‘hua’ sinogram, the description states that three of the tiles have the sinogram for 王 ‘wang’, thus 万王 [wan wang]10, 索王 [suo wang] and ‘King of Cakes’ 餅王 [bing wang]11. Further, there is a tile that is also found in the Himly set – a ‘King of All’ 摠王 [zong wang].

2. An Explanation (Hypothesis) of the 'Flowers' and 'Kings Tiles'.

But what are reasonable hypotheses of the functions of these extra groups of tiles? Thierry Depaulis (2007) hypothesised these extra tile groups perhaps functioned as Jokers and as modern ma que ‘Flower/Season’ tiles12. Recently, a book titled “Maque de jingyan yu jiqiao” (Maque’s Experiences and Skills) (1941), by Liu Yishu, has come to light13 that may provide grounds for such a hypothesis. This book describes two ma que games that contain these extra tiles. The first ma que game is called North China’s “花麻雀14 hua ma que” [Flowers Sparrow]. According to Liu [footnotes and comments, in square parentheses, are added by the authors. Chinese terms, in Pinyin, are in also square parentheses.]:

However, in the latter-day hua ma que, people often add more sets of flowers such as Lute 琴 [qin], Chess 棋 [qi], Calligraphy 書 [shu], Painting 畫 [hua], Duke 公 [gong], Marquis 侯 [hou], General 將 [jiang], Premier 相 [xiang], etc. Even “Final Victory” [against Japan] 最後勝利 [zui hou sheng li] [see Figure 2b below] and “Will Win War of Resistence” [against Japan] 抗戰必勝 [kangzhan bi sheng] are sometimes added15. In a word, in principle (the Outer Flowers) should be five sets, but can be added to, [to make] nine sets, or even eleven sets according to the players. Most ma que players in North China custom-tailor the flower sets. [See Figure 2d for the tile set reconstruction with these additional Flowers].

Inner Flowers [li hua] are four pieces. Cash King 筒王 [tong wang], Strings’ King [suo wang], Myriads’ King [wan wang], General King [zong wang]. The Cash King [tong wang] can act as any of the ‘Cash’. [See Figures 2c and 2d for tile set reconstructions including these four tiles]. The functions of the Strings’ King and the Myriads’ King can be inferred accordingly. The General King [zong wang] can act as any of the Cash, Strings, Myriads, or East, South, West, North.
Center [zhong], Fortune [fa] and Blank [bai] are all used as [an individual] “Word”. … In ‘hua ma que’ each player holds sixteen tiles. The game-play is the same as common ma que 16…

The second ma que game is called Changsha’s 王麻雀 “wang ma que” [Kings Sparrow]. According to Liu: There are both resemblances and differences between ‘wang maque’ and ‘hua maque’. ‘Wang maque’ prevails in Changsha, Hunan [Central China]. The game-play is based on thirteen tiles [‘hua maque’ has sixteen]. A notable feature is that there are eight Inner Flowers [li hua] [‘hua maque’ has four]. 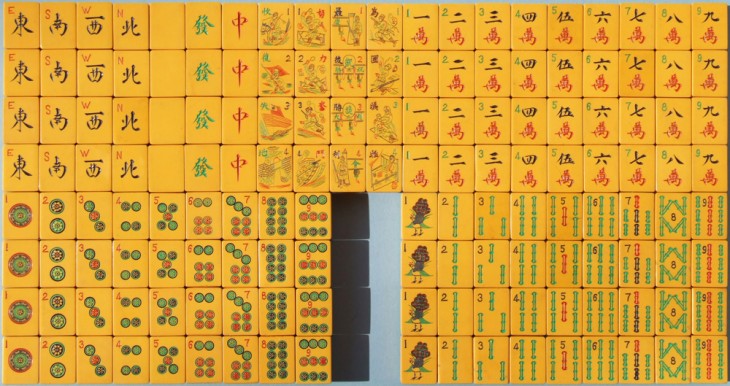 Figure 2a. A bakelite tile set consisting of 16 ‘Flowers’. Produced in China. 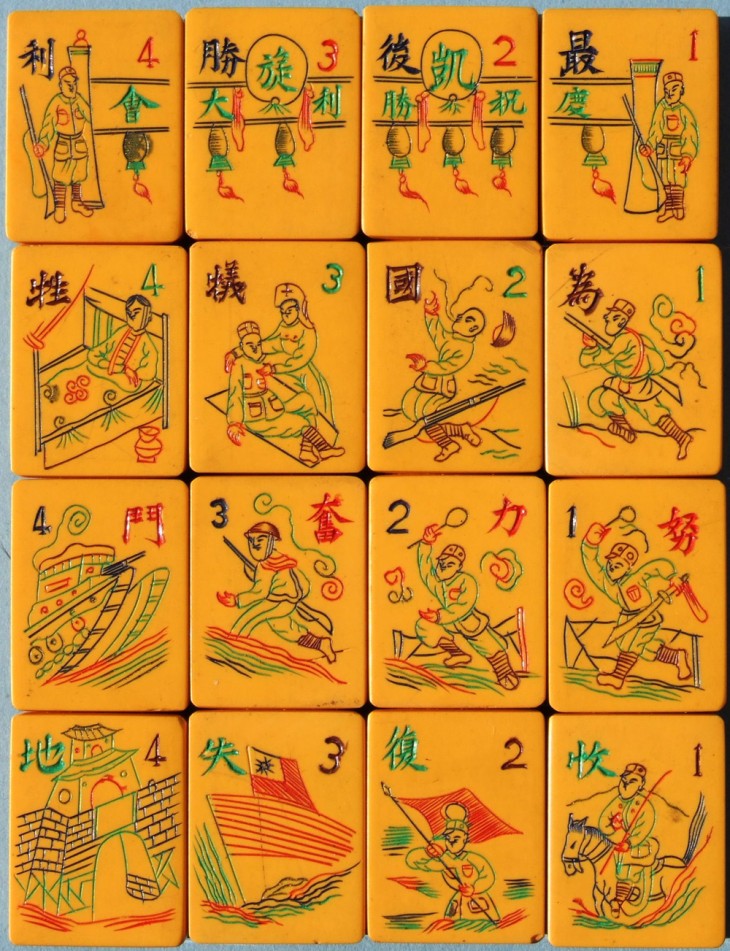 Table 119 provides a list of all the types of tiles described, and implied, for Beijing/Tianjin hua ma que and Changsha wang ma que. Also listed are all the types of tiles found in the Himly, Glover, Sheng and Nakamura tile sets. From Liu’s description and Table 1, we know that three of the Inner Flowers – tong hua, suo hua and wan hua – in both hua ma que and wang ma que, “can act as any” particular number of tiles within their respective suits, and that the identity of the target suit, is denoted by the upper sinogram on each tile.

Table 1. Inner Flowers and Outer Flowers(These are the conventional number).

Both games have a zong wang Inner Flower tile, thus completing a quartet, but with an upper sinogram referring to different target groups – that is, it denotes generalised usage.

[Note; In the figures below, where the suits’ iconography is not known, the iconography from the (1924) Nakamura set (see Figure 1 above) was used since it contains many similarities with both the hua and wang ma que groups of Flowers]. From Liu’s observation above – that common ma que (Shanghai ma que /Classical Mahjong(g)) and hua ma que have the same game-play, except for some differences in scoring patterns, we may argue that similar tiles in both games have similar functions with respect to the formation of melds. This also applies to wang ma que, although in that game the wang tiles can be used to claim additional melds not available in hua ma que.

In common ma que it is the three Suits, Directions/’Winds’, and the ‘Dragons’ from which melds are formed in the player’s hand and it is precisely these groups that are the target groups for the Inner Flowers in hua and wang ma que. Since the Inner Flowers function as substitutes, or ‘Jokers’ 20, for target tiles in these particular groups in order to form melds, we can therefore infer that Inner Flowers’ tiles are also used in the player’s hand – they are concealed.

In summary, Inner Flowers are ‘Jokers’ that function as substitution tiles for the formation of melds that are concealed. Outer Flowers, on the other hand, act as ‘Flowers’ as in common ma que /Classical Mahjong(g). Hence they are Flowers that, when acquired, must be exposed immediately.

With reference to Table 1 and Liu’s statement that “… in principle (the Outer Flowers) [in hua ma que] should be five sets, but can be added to, [to make] nine sets, or even eleven sets …”, it is clear the 1924 Nakamura tile set (Figure 1) has identical tiles to the entire hua ma que tile set and also falls within the criteria for the number of Flower groups in hua ma que . Together with their relatively close proximity in time (~ 17 years) and their probable North China connection, we have good analogical grounds to argue that the Nakamura set is therefore an expanded example of that species of ma que game as exemplified by Liu’s North China hua ma que description. If this is the case, then taken together, both the 1941 description and the 1924 tile set give a more accurate view of the hua ma que game than does either one separately.

2.2 The ‘Flowers’ of the Himly, Glover, Sheng and Nakamura Tile Sets.

Thierry Depaulis24 also observed that the composition of the Changsha wang ma que variant corresponded (with the exception of one tile) with a variant game of Vietnamese ma que as described by Nguyen Xuan Mai (1950). According to Nguyen, the variant game uses either four or eight extra ‘King’ ‘wang’ tiles, each denoted by one, framed, sinogram – that is, without the ‘wang’ sinogram. Thus, for the ‘Four ‘Kings’’ game; 花 hua, 元 yuan, 喜 xi, 合 he are used. For the ‘Eight ‘Kings’’ game; hua, yuan, xi, he and also tong, suo, wan and zong are used. Comparison with the sinograms and functions of the eight Inner Flowers from wang ma que shows that, with the exception of the ‘hua’ tile25, the rest of the Vietnamese ‘King’ tiles sinograms and functions are comparable with those in wang ma que. These observations provide grounds for considering Changsha wang ma que a Southern China variant.

If this analysis and explanation is valid, then it is clear that the game of ma que has had a more rich and varied developmental history than was previously known. From evidence from the earliest ma que game (as evidenced by the earliest tile sets and descriptions) and from descriptions of ma que in Mid and Late Qing novels (see Lo, 2004 and Xu, 2007) including ma que game descriptions from manuals in the early 20th century up until Liu’s 1941 description, the ‘body’ of the game of ma que as expressed by its variant forms (see Stanwick 2004a) appears to have developed (and is developing) by a process of ‘mosaic evolution’, with various forms perhaps appearing and developing, and then either disappearing or co-existing, at different rates and periods, respectively, over time.

Special thanks to Thierry Depaulis for his kind assistance with the text. Thanks to Julian Bradfield, for his translation of Himly (1901 Pages 7-11). Thanks also to Tony Watson for the  illustrations of the reconstructed tile sets.

Wilkinson, William H.,
– (1890): Published in 1901 in O’Donoghue F. M. Catalogue of the Collection of Playing Cards Bequeathed to the Trustees of the British Museum.
– (1893): Published in 1895 in Culin S., Korean Games with Notes on the Corresponding Games of China and Japan, University of Pennsylvania. Facsimile reprint, Games of the Orient, Tuttle, 1958.
– 1895. ‘Chinese Origin of Playing Cards‘. In The American Anthropologist, vol. VIII, p. 61-78.