The Origin and Development of the Mahjong Tile Set. Part 2. 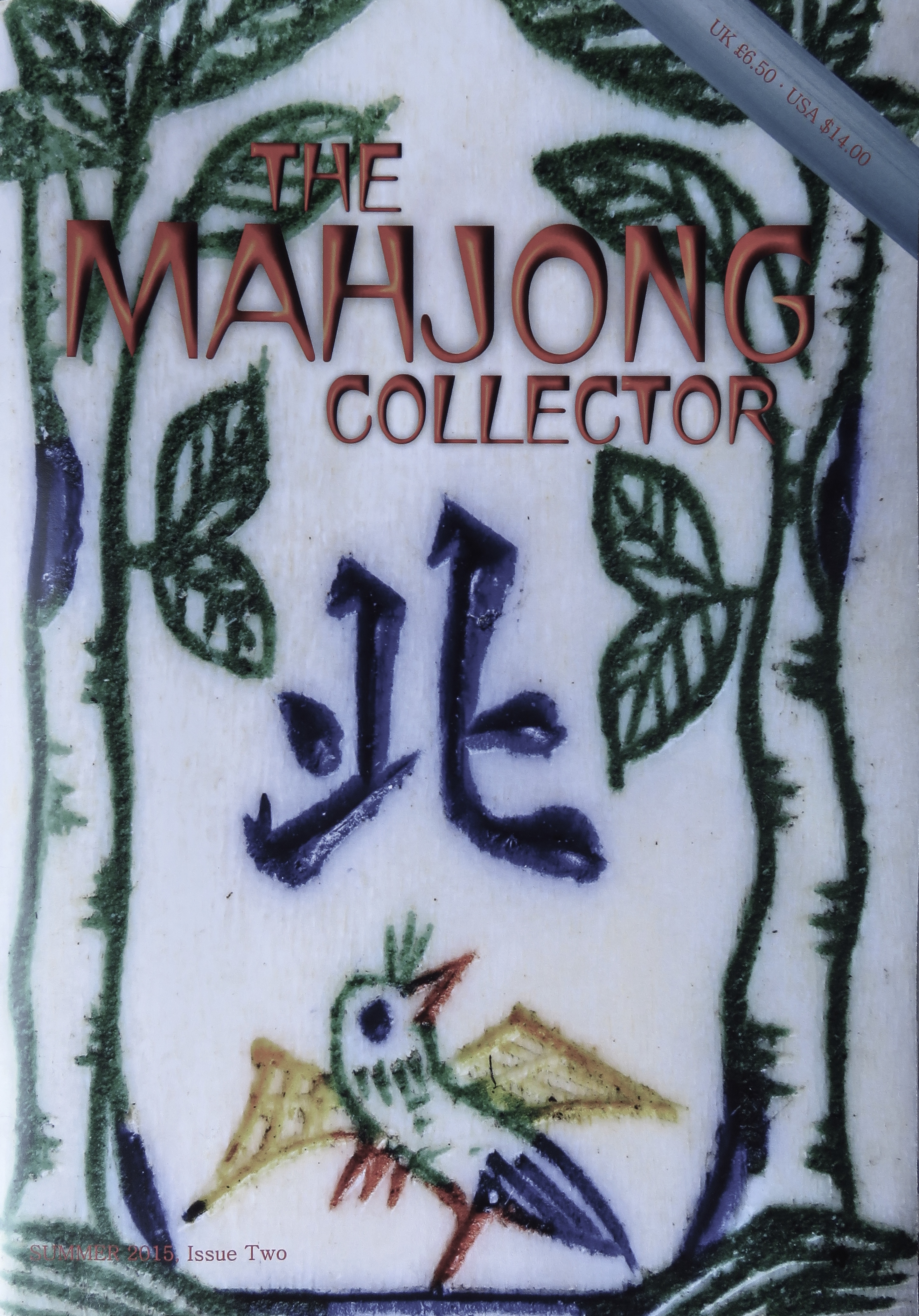 This article has been modified from the original, with the addition of extra explanatory material.

It may seem strange to our modern sensibilities that the Mahjong tile set had anything to do with money. Just cast a glance at any modern set – and by modern I mean from at least the early twentieth century – and you will see that the images on the tiles appear to bear no obvious resemblance to money. So, if there was a connection, how was Chinese money used for games and how did it influence the Mahjong tile set?

As I mentioned in part 1, there is good evidence that there was a connection between money and the iconography of the Mahjong tile set, via Chinese pasteboard playing cards.

Firstly, as we have seen, the Chinese names for the three suits in Karl Himly’s tile set (circa 1872) were;

Secondly, the Chinese names for the three suits from a three-suited deck in his playing card collection were;

All three names in both tile set and card deck were based on denominations of money. He also noted that the three suits, in both tile set and card deck, were quadruplicated – 36 tiles and 36 cards in each suit running from 1-9, respectively. Thus, the similarity in the suit names, the number of suits with each having cards numbered 1-9, plus the quadruplication of each playing piece, led Himly to infer that his tile set was in fact a three money-suited playing card game played with thick cards, that is, tiles. 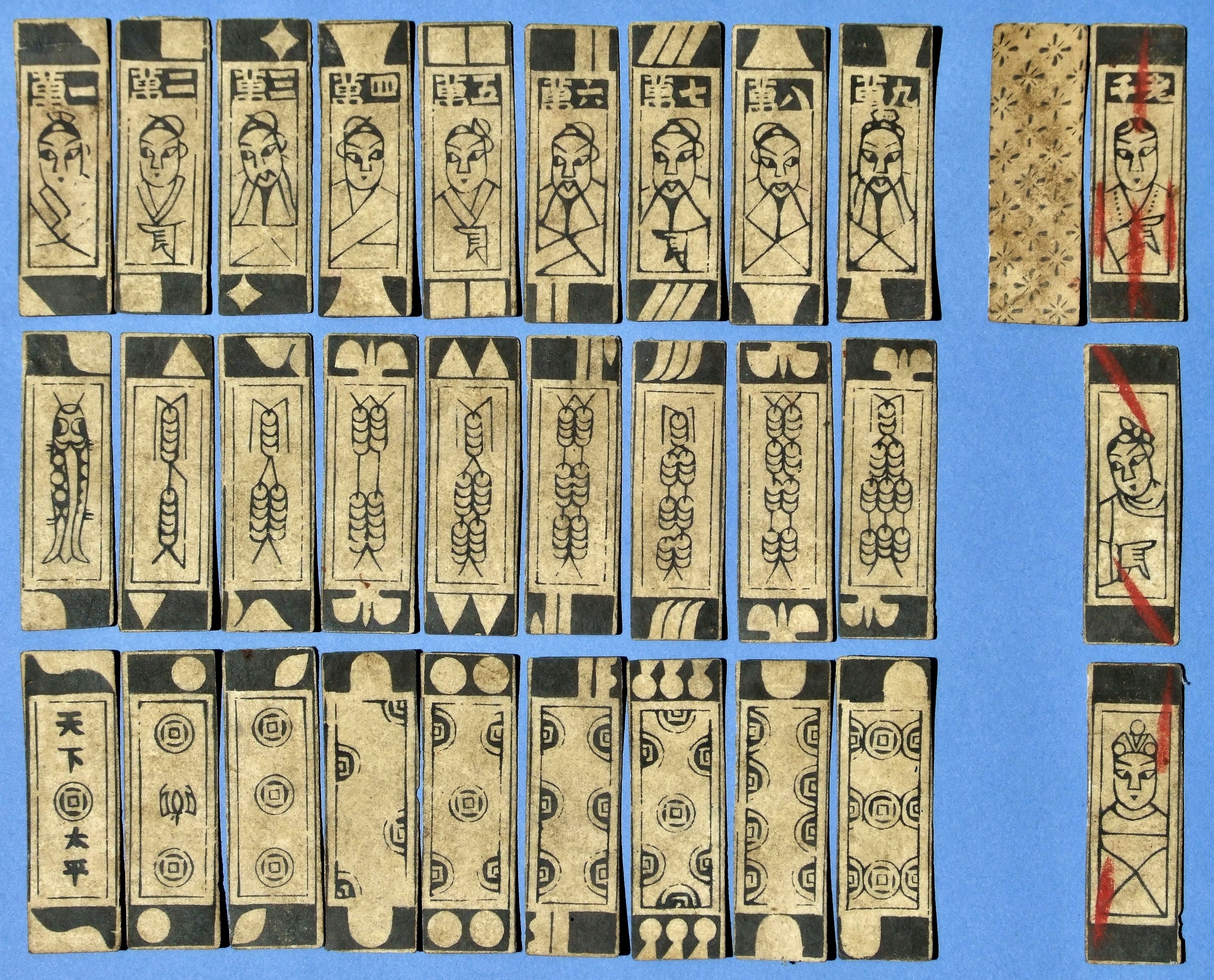 Figure 1 is an example of an early 3-suited deck based on denominations of money, with the cash suit in the bottom row, Strings of Cash (clearly represented in this example) in the middle row and Myriads of Cash in the top row.

So, to find out where the three money-suited card deck came from – and indirectly, where the three suits in a mahjong tile set came from – we need to examine early Chinese playing card manuals describing games played with money-suited playing cards. The writings and manuals we turn to are from the Ming Dynasty (1368 – 1644), notably those of the Late Ming scholars Lu Rong (1436-1494) and Pan Zhiheng (1556-1622), translated by Andrew Lo of the School for Oriental and African Studies (London).

This particular four suited card deck was, in the case of Lu Rong, for the four player trick taking game called 鬥叶子 dòu yèzǐ (Compete with Leaves). For Pan Zhiheng it was for the four player trick taking game of mǎ diào 馬掉 (Horse Dropping [a Leg]) or, according to another Ming writer, Feng Menglong (1574-1646), either mǎ diào 馬吊 (Horse Hanging [a leg]), or mǎ diào jiǎo 馬吊腳 (Horse Hanging [up one leg]). [Note; A ‘Trick’ is where a card that is considered to have a higher value trumps a card of a lower value. A ‘Meld’ is a certain combination of cards]

The mǎ diào card deck was comprised of 40 cards (38 in the case of Lu Rong’s deck) divided into four suits.

Looking at Figure 1 we can see the top row represents the shí wàn or tens of myriads suit (a myriad is 10,000 strings). For example, the 1st card on the left of the row is the 20 myriad guàn card. At the top of the card above the portrait is the number wàn shí èr 万十二. Reading from right to left we have two (èr), ten (shí), ten thousand (wàn). Two tens is twenty. Hence twenty x ten thousand strings = 200,000 strings of guàn. (A guàn is 1000 cash coins). Next is the Myriads or wàn suit (10,000 strings of cash) then the Strings or suǒ suit (strings of 100 cash). The Strings suit is represented by spools of string. The bottom row is the Cash suit with depictions of coins on the cards.

From Lo’s translations we find that the four-suited deck of cards was modified by having the top Tens suit discarded, but one of the cards retained (the Thousand Myriad guàn card (1000 x 10,000 guan)) which became the top card of the ‘Myriads’ suit (this card was sometimes called ‘Old Thousand’). So 10 cards in the Myriads suit + 9 in the Strings suit + 11 in the Cash suit created a three-suited deck of 30 cards. 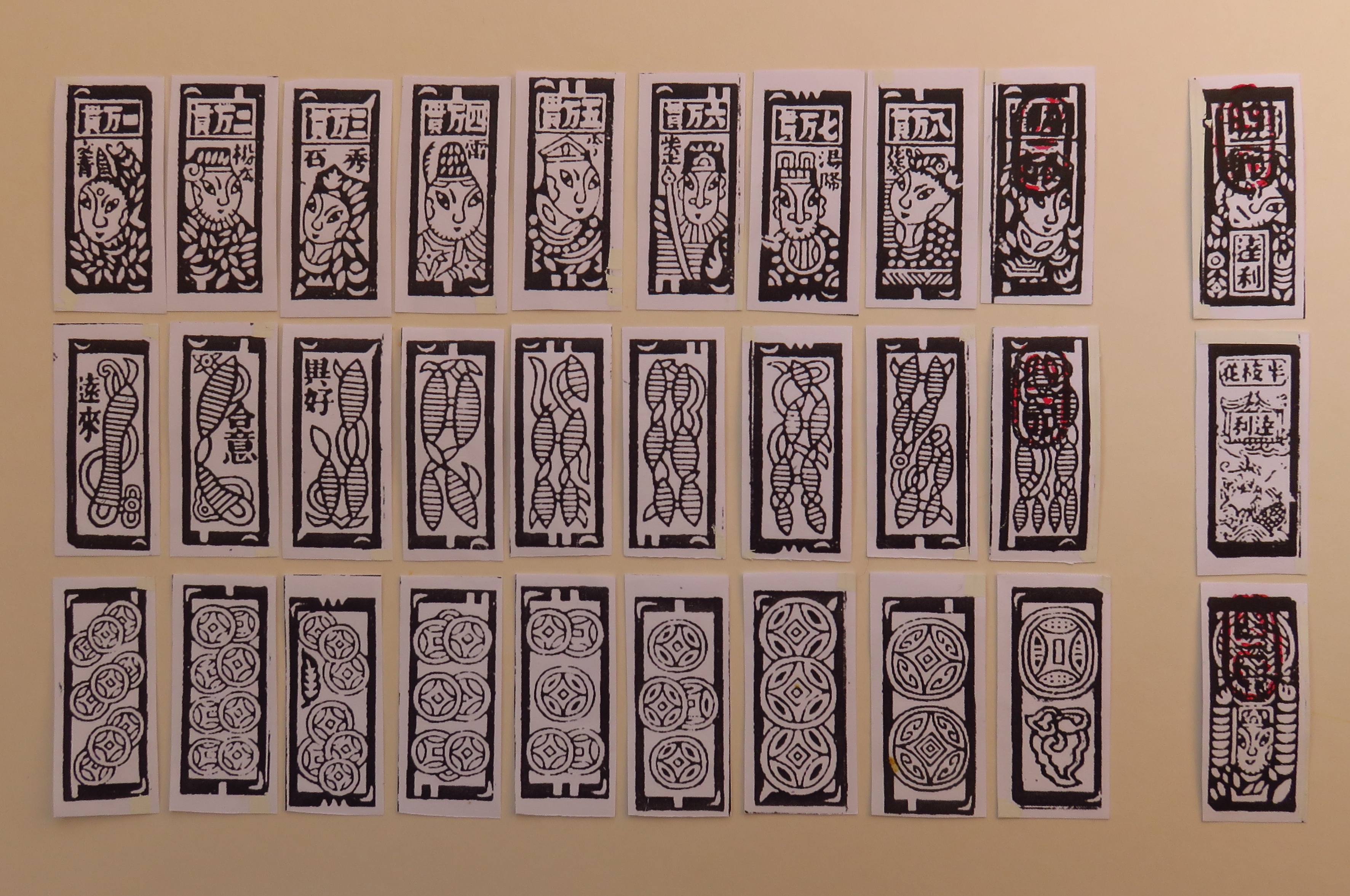 Although the 40-card, four-suited mǎ diào game also continued into the Qing dynasty (1644-1912), by the Late Qing in the 19th century it had died out.

The three-suited 30-card deck was doubled to a 60

The three-suited 30-card deck was doubled to a 60-card deck. This deck was also used for trick taking games but, as we find in the important 18th century book on card games, Jin Xueshi’s Mu zhu xianhua (Idle Chats on the Swineherds’ Game), 1783, it could also be used for games of the draw and discard variety – the variety to which Mahjong belongs – such as the 60 card game of 默 和 mò hú (Silent harmony or Playing Silently). When this 60-card money-suited deck was doubled to a 120 cards, then effectively each card was quadruplicated.

This deck of 120 cards allowed for the formation of melds of three or four cards from the same suit, as found in the 18th century game of 碰和 pèng hú (Encountering Harmony, or Playing for Points). These melds, in addition to sequences of consecutive numbers from the same suit, were found in another pèng hú type game called 十壺 shí hú (Ten Points or sometimes Ten Pots).

The term pèng hú was used for, amongst other things, an 18th century domino game using 105 cards and also as the name for a group of games that shared the basic characteristics of the pèng hú money-suited card game. Importantly, in the late 19th and early 20th centuries it was also used as the name for the game of má jiàng (Mahjong), as shown on this sliding front of an early 1920s Mahjong cabinet, Figure 3.

The stage was set for the emergence of the má jiàng (Mahjong) tile set and game. The raw materials were there – a quadruplicated money-suited deck of 120 cards, the system of draw and discard and the formation of melds of three and four of a kind and melds of consecutive numbers from the same suit. It just took the transfer of the three quadruplicated suits onto a domino tile format and then the addition of the Directions and extra tiles.

But when and where this emergence happened remains a mystery. The earliest tile sets we know of give us a glimpse of what the insignia may have looked like when the first sets were produced. We will have a look at these earliest sets in the next installment.